Germany. On 5 April 2022, the Federal Ministry of Justice forwarded a draft for a Whistleblower Protection Act to the other ministries for voting. This marks the beginning of the implementation procedure of the so-called EU Whistleblower Directive, which has been overdue since 17 December 2021.

What is it about?

The EU issued a directive on the protection of whistleblowers in October 2019 (the so-called Whistleblower Directive). However, EU directives – unlike EU regulations – must first be transposed into national law and usually do not have direct effect. The new Whistleblower Protection Act is intended to implement this directive in Germany. Up to now, there has only been a patchy protection in Germany, developed through case law, especially of the labour courts, for persons who give notices about criminal conduct in companies and authorities. The new law specifies certain protective measures in favour of whistleblowers and prescribes internal and external procedures for reporting violations of the law (so-called reporting channels).

Which companies are affected?

What is there for companies to do?

Companies with at least 50 employees are obliged to set up and operate a unit for internal reporting of criminal offences, certain administrative offences and certain violations of Union law. It should be noted that employees have a right to choose between this internal reporting channel and notification to an external, official reporting body. Obstructing or attempting to obstruct contacting an external reporting office may be punishable by a fine of EUR 100,000. An advantage for companies is that employee protection should only be possible in the case of disclosure to the public if a report to the external reporting office has been unsuccessful. The internal reporting channels must be designed in such a way that only the persons responsible for receiving and processing the reports and the persons supporting them have access. Reports must be possible in text form (in any case by e-mail) and orally (by telephone). The person making the report is entitled to a personal meeting with the person in charge of the reporting office. Failure to set up an internal reporting office can be punished with a fine of 20,000 EUR. Internal hotlines are obliged to report back within three months of acknowledgement of receipt, including the measures planned and already taken, as well as the reasons for these measures. Internal investigations and the rights of the persons who are the subject of the report must not be impaired by the notification. Here, it is particularly important to observe the requirements of data protection law in connection with the processing of personal data.

How should whistleblowers be protected?

According to the draft, “reprisals” directed against whistleblowers are to be prohibited. According to the directive, this includes, for example, dismissal, denial of promotion, transfer of duties, issuing a negative reference or non-extension of a fixed-term employment contract. Important: There is a legal presumption in favour of the person making the reference that a disadvantage in the above sense constitutes a reprisal. In the event of a dispute, the employer must prove that the disadvantage is not based on the report In the event of a violation of the prohibition of reprisals, a claim for damages arises and a fine of up to EUR 100,000 is to be imposed.

By when must the legal requirements be implemented?

With regard to the prohibition of reprisals, this is in part a codification of the case law on the prohibition of disciplinary measures under labour law, so that some of the described discrimination is already inadmissible under current law. The current draft bill provides for a transitional period until 17 December 2023 for the establishment of internal reporting offices only for employers with less than 250 employees.

Concrete implementation in the company

In the episode “Blowin’ in the Wind – The introduction of whistleblowing hotlines in companies” of our HÄRTING.fm podcast, we spoke with our guest about the implementation of the legal requirements and the concrete introduction of a reporting channel in the company. You can listen to and subscribe to the episode here via spotify, Apple Podcast or Deezer. 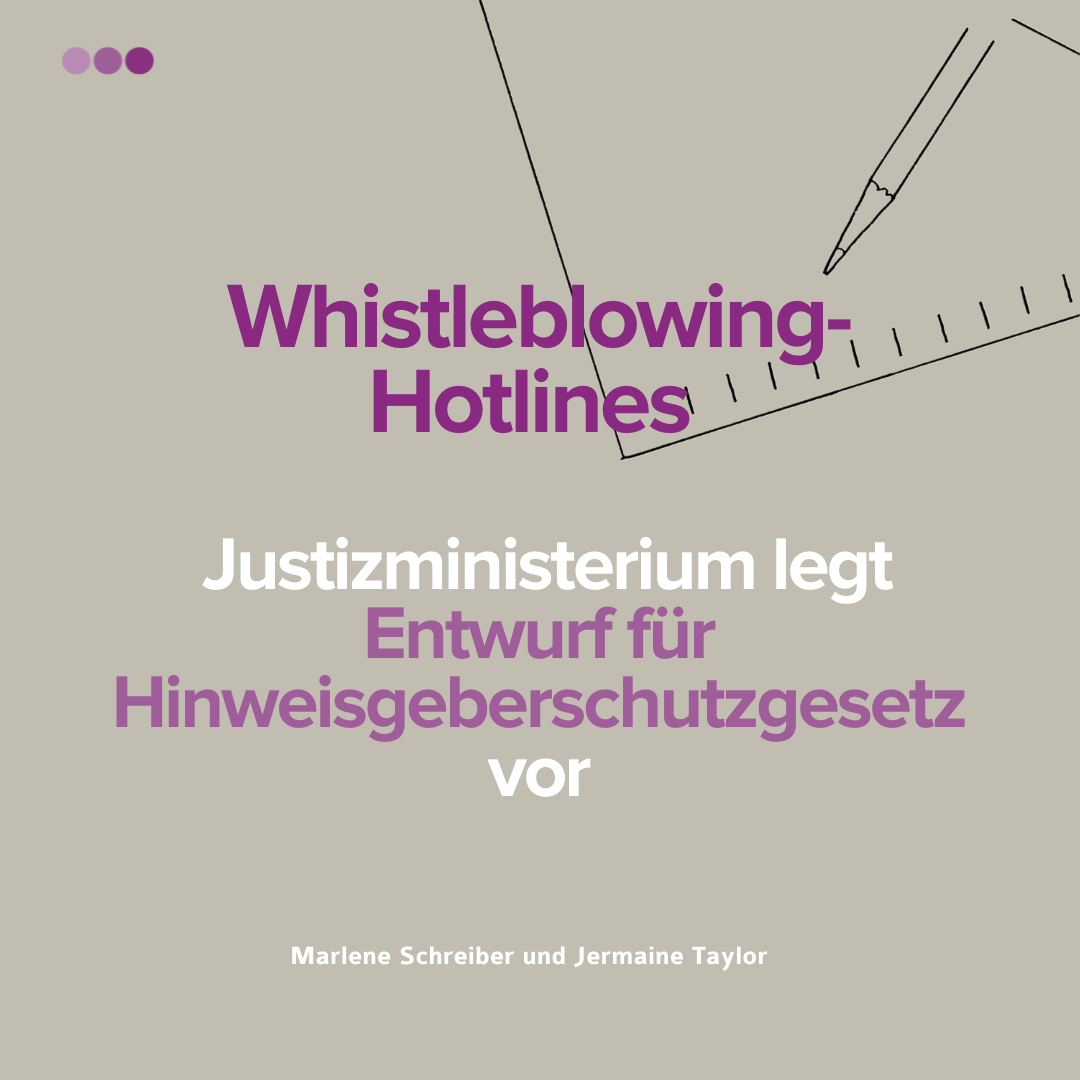